Let It Roll Festival is an event annually held in beautiful Czech capital city Prague. It started 2003 like an evening with the best music performers in the Abation club, Tocnik castle or in factory halls. It soon grew into one of the most popular drum and bass parties in the country. In 2008, the festival went outside with the first open air “Let It Roll Open Air”  with 3000 visitors. The festival doubled that number the year after. In 2011, it grew even more and that year brought 3 open air and 3 winter festivals in three countries – the Czech Republic, Poland and Slovakia. Today, this is one of the most visited festivals of this kind of music genre in Central Europe, and it always gathers a massive lineup of the best drum and bass performers. 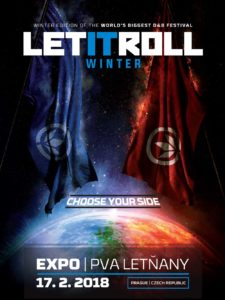 Over the years, Let It Roll Open Air has become renowned for its visual effects as much as for the music itself, and the fest’s late start times allows for plenty of strobes and laser shows to illuminate the night sky. As the festival continues to add new stages and test the limits of what might actually work, the visual component has evolved into one of the main attractions. In 2013, for example, the main stage famously came to life as a giant robot complete with flamethrowers and mechanical parts that moved in time with the beat. Now that record labels are regularly invited to host their own stages, the spirit of competition has only led to more wild light and fireworks shows, whether at the enclosed Madhouse stage or the expansive Factory stage.

More than 25,000 fans attend Let It Roll Open Air annually, but the three-day summertime festival isn’t the only party the organizers have cooking. They’ve also begun to curate single-day Let It Roll Winter events, in the Czech Republic and Slovakia. The lineups for these events give the summer festival a run for its money. Let It Roll also holds smaller touring events throughout the year, popping up at clubs in neighboring countries like Germany.

For further information and ticket booking please contact us: