Ai Weiwei is a man of contradictions: both deeply sensitive but possessing a strong, fighting spirit, he is one of the most important artists today, but one who is inspired by the past. Perhaps this is why the new exhibit, Ai Weiwei at Cycladic is so fitting. The exhibit itself which is housed throughout  the entire museum, including the neoclassical Stathatos Mansion, sees the meeting of two ancient cultures, those of Greece and China which will seamlessly meld for the next six months (until October 30th, 2016) provoking admiration, conversation and, definitely, opinions. It’s also a seminal exhibition for it marks not only the introduction of Ai’s work to the Greek public but also signifies the first time he has exhibited in an archeological museum. 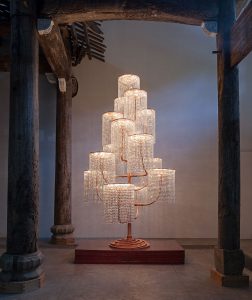 Ai’s exhibition at the Museum is stunning and thought provoking to say the least. The 25 item selection, which features predominantly wood and marble pieces, showcases some of the Chinese artist’s most seminal works. There are also new pieces which Ai designed specifically for this exhibition. Guests are greeted by the first of these as they ascend the grand entry staircase to the Stathatos Mansion: the three satin Flags (2016). Inspired by the silver and gold thermal blankets which are handed out to refugees upon their arrival on Lesbos, the artist reimagined the Greek and European Union flags in reference to the two, “struggling to be surrogate homes to the displaced and homeless.” The third flag is inspired by the outline of the lifeless body of the Syrian child, Alan Kurdi, the haunting image of which Ai replicated a few months ago in an attempt to raise awareness about the atrocities the child and his fellow country people are living under as a result of. While this image garnered Ai much attention and some critical acclaim, it also sparked a fair amount of unfavorable criticism. To note, 10% of all exhibition proceeds are donated to Médecins Sans Frontières (MSF) and the Greek NGO METAdrasi, both of which are providing much-needed aid to the Greek refugee crisis.

A walk around the museum reveals other works on every floor. Some—like Dust to Dust (2008) or the poignant porcelain bone,Remains (2015)—are nestled among the Museum’s permanent exhibits. Thematically these fit in so perfectly with the permanent pieces that a visitor has to search out their special wood display cases or look for the reference cards to discern where the old ends and the new begins. And then there is also the photography exhibit where in Ai curated approximately 600 photos from local Greek photographers’ experiences in Lesbos. These are displayed in a room adjacent to his photographic wallpaper which is made up of the 12,030 iphone images that Ai took from mid-January to mid-April on the island.

“When an individual assumes that deeply believed understanding to communicate their emotions, their knowledge… it is very vulnerable and dangerous. Sometimes they are successful and sometimes not as much—like me. I am just an activist.”

For further information and ticket booking please contact us.